It’s time for the little guy to be in the spotlight, and that’s exactly what Champions of the Track is looking to do with their new multimedia project titled Treasure of the Midwest.

Champions of the Track is a digital media company based in Indiana with the sole purpose to promote horse racing around the world. With a strong love of the sport, the small team brings an “outsider’s perspective” to the sport, hoping to encourage more “outsiders” to fall in love right along with them.

Treasure of the Midwest is a partnership between Champions of the Track, the Indiana Thoroughbred Alliance, Indiana Horsemen’s Benevolent and Protective Association and Indiana Grand Racing & Casino to promote the breeding and racing of Thoroughbred horses in Indiana. The project will consist of a YouTube series showcasing some of the state’s farms and horsemen, as well as written stories of Indiana-bred horses. The three-person team is currently visiting farms and Indiana Grand to gather stories and share the enthusiasm.

“Indiana offers such a large financial benefit to breeders, stallion owners and racehorse owners who choose to participate in the Indiana Thoroughbred Breed Development Program,” says Kaeli Bartholomew, owner and creative director for Champions of the Track. “Indiana’s horseracing industry is a well-kept secret that we want to spread nationwide.”

One of the first Indiana farms featured was Springcliff Farm, owned by Christine Cagle in Martinsville, Indiana. In 2021, alone, Springcliff has foaled 50 future racehorses. The farm was originally established in 1864 by the Thomas family. The beautiful farm is adorned with red barns and several lush, green pastures dotted with healthy and happy broodmares and foals.

“I just love what I do, even with the long hours during foaling season,” says Cagle. “Indiana doesn’t get as much credit for its racing program as we should. We’re always growing. In fact, I have breeders from as far as across the globe sending their mares here to foal and be part of the program.

“Having this multimedia push from Kaeli and Champions of the Track will be such a help for the little breeders, owners and horsemen who maybe can’t afford their own marketing plans,” Cagle continues. “It was a no-brainer for us to participate and to support this endeavor.”

Horses such as the beautiful gray filly, Piedi Bianchi, are also part of the highlights. Indiana-bred Piedi Bianchi stormed on the racing scene as a 2-year-old racing in California. She finished in the top five in the Breeders’ Cup Juvenile Fillies in 2017 and has sense raced from California to Indiana to Florida, earning more than $610,000 in lifetime earnings for her owners. Veteran supporters of the Indiana program, Deann and Greg Baer, DVM, bred the super filly and have been excited to follow her progress.

“It’s been a lot of fun, racing this filly,” owner Jay Oringer told Bartholomew. “It’s exciting for my whole family and group of friends in Queens, New York, to follow her. She has a lot of fans!”

More information can be found on the Champions of the Track website and on their social media platforms.

DISCLAIMER
ITA’s website is for general informational purposes and should not be considered conclusive. Anyone wishing to participate in Indiana’s Thoroughbred Breed Development program, or seeking information on registering foals, mares or stallions should contact the Indiana Horse Racing Commission for specific guidelines. 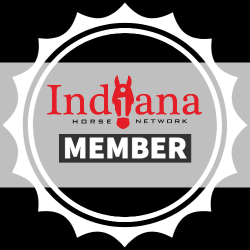